In Memory of Gloria Ratti 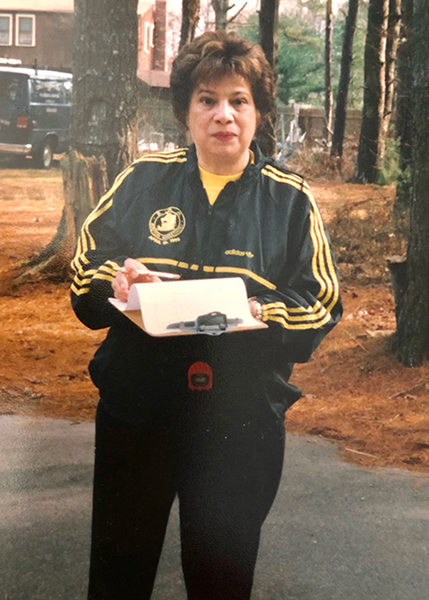 A South Boston native, Gloria (Graceffa) Ratti’s greatest impact on the sport of running – and her proudest work – revolved around the B.A.A.’s Boston Marathon. Gloria’s involvement in the annual April race spanned a variety of roles over five decades, from timing and checkpoint pioneer to event historian, Vice President, and Secretary of the B.A.A. Board of Governors.

“Gloria in essence was the First Lady of our sport, no matter where she went,” said Guy Morse, former B.A.A. Executive Director, Boston Marathon Race Director, and colleague of Gloria for the better part of three decades. “From champions to common runners, Gloria personally cared for everyone and represented the human side of running. It was her mission to make the Boston Marathon more than a single-day event; she strived to make it a personal experience for so many. She did that, but also was the moral authority that helped propel the entire organization forward.”

Joining her late husband Charlie at many races around New England, Gloria began volunteering with the North Medford Running Club at the Boston Marathon finish line beginning in the 1960s. Taking immense pride in her role, it was Gloria who first instructed finish line officials to stay at their posts and record the names and times of all finishers coming through the chute, not just the traditional top 100 as had been the norm. A forward thinker, Gloria knew finishing a marathon—especially the Boston Marathon—was a noteworthy accomplishment and wanted to honor all athletes for their effort. Ever since, the marathon has kept track of all who’ve crossed the famed Boylston Street finish line.

Gloria Ratti wasn’t afraid to share her opinion, and oftentimes it was just the advice that those in the sport needed to hear. Noticing a lack of support for women runners in the 1970s, Gloria stepped in to provide assistance and recognition as the women’s running movement was beginning to take shape. Her sense of loyalty to the race, running community, and women runners was evident. 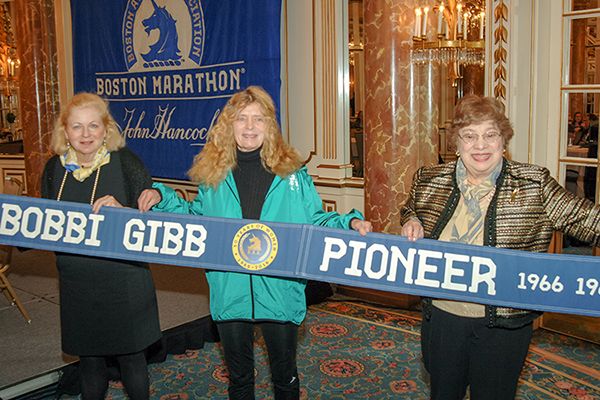 Understanding that women’s checkpoints along the race route weren’t maintained as diligently as the men's, Gloria devised an innovative system to keep track of the women’s leaders and better showcase their talents—an especially important duty after the infamous 1980 Boston Marathon. Stationing officials all along the course, Gloria trained each to accurately identify and record athletes as they passed by. Long before tracking technology became the norm at road races around the world, Gloria established a system that would uphold the integrity and authenticity of her city’s race. The system would soon expand to include the wheelchair division, and ultimately helped illustrate how each race unfolded, giving members of the press access to pertinent race information that helped bring their stories to life.

Gloria’s efforts left a meaningful mark on all at the Boston Athletic Association, and she was later elected to the B.A.A. Board of Governors in 1987, not only representing the organization, but more importantly her native city and running community. In 1993, after retiring from her government work with the C.I.A. (which she never disclosed details of), Gloria joined the B.A.A. as a full-time employee. She took tremendous pride in working for the organization, often wearing its trademark unicorn emblem on her lapel, scarf, and handbag.

Gloria’s fingerprints can be found on many decisions that altered the direction of Boston Marathon and running history. In addition to her innovations in timing and scoring, it was Gloria who staunchly fought to ensure that equal prize money was offered to top finishers beginning in 1986, when the race shifted from amateur to professional. Gloria was not going to shortchange women from earning the same as their male counterparts, breaking a glass ceiling that was typical at other events. Gloria also had a keen eye for storytelling and significance: she helped design the perpetual Boston Marathon champion’s trophy, now one of the most recognizable symbols in all of road running.

“The real force of her nature was the employment of high standards and commitment to excellence,” said B.A.A. President and C.E.O. Tom Grilk, who first noticed Gloria’s dedication while still a finish line volunteer at races in the 1970s. “With Gloria, it was this very strong personal commitment to excellence, to getting things done the best they can be and the way that they ought to be done. The core value that drove her was that things should be done as well as possible.”

Recognizing Gloria’s sense of history and deep respect for tradition, Guy Morse tapped Gloria to serve as B.A.A. archivist and historian approaching the centennial Boston Marathon in 1996, aiming to tell the event’s history through artifacts, memorabilia, and its many champions. Orchestrating a traveling exhibit and speaker series, Gloria helped connect the race’s history with runners and non-runners alike throughout Greater Boston. With each stop, Gloria made everyone feel like the Boston Marathon was their marathon, instilling a sense of pride and ownership of the event that brought the community even closer together. 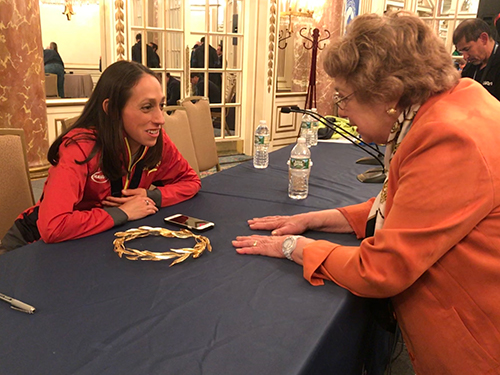 At the time, the B.A.A.’s archives were extremely limited due to past financial constraints and a fire. Piece by piece, medal by medal, the B.A.A. archives quickly transformed into a plethora of trophies, photographs, bib numbers, shoes, and apparel, all thanks to Gloria’s ability to connect with others and demonstrate the race’s legacy. Yet Gloria didn’t just collect items: she sought to explore and share the never-before-known stories and legacies of champions, notable finishers, and early B.A.A. founders. Building upon her work year after year, she established relationships with athletes, coaches, and officials in a way very few could, maintaining meaningful connections that lasted throughout her life. 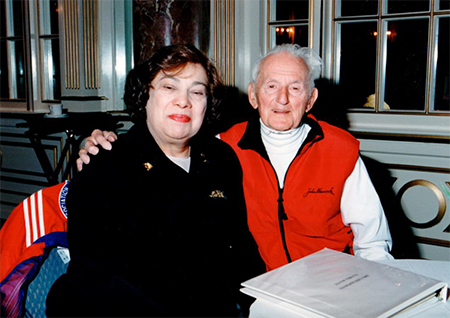 Patriots’ Day was when Gloria shined brightest. From sunup to sundown, Gloria was everywhere: escorting dignitaries around the start in Hopkinton; leading the Grand Marshal towards the finish in Boston; teaching politicians how to properly place the olive wreath upon a champion’s head (“If it falls off, you’re in big trouble!” she’d quip); and sharing tidbits of race history with newly crowned winners. Gloria welcomed one and all into the Boston Marathon family, spreading a sense of belonging that would often be reinforced with handwritten notes. Throughout a traditional race weekend, the line to say hello to Gloria was at least five people deep. Everyone felt personally connected to Gloria and the Boston Marathon.

“Gloria may not have been an athlete, but she had terrific stamina especially during race week,” said Joann Flaminio, the first female president of the B.A.A. and a close confidant of Gloria. “She was the first to arrive and last to leave at each and every event. Often it would take an hour for us to walk from the Expo back to the hotel as people would stop and she would regale them with a story or two. If you had running shoes on, she would talk to you. She spread the good word of the B.A.A. and the Boston Marathon everywhere she went.” 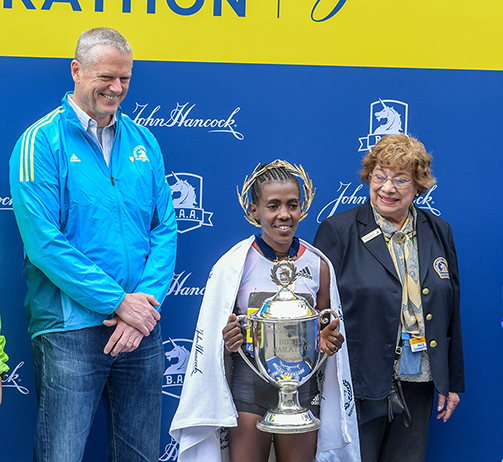 Gloria applied this same diligence to her role as B.A.A. Vice President, attending every staff meeting, taking copious notes, and never missing a detail for the race ahead. Prior to the pandemic, Gloria could be found holding court at the B.A.A. office lunch table, sat at the head in her bright orange chair sharing stories, advice, and Jeopardy! trivia. She’d read the newspaper cover to cover and would often clip out stories to share with colleagues and friends, pinning all sorts of articles and photos to the office bulletin board. When the organization began working from home, Gloria was frequently first to join a staff meeting, savoring the time to catch up with her work family.

One of Gloria’s cherished passions was spreading the organization’s heritage to others, especially to colleagues, new employees, and visitors. The “Gloria Tour” was a B.A.A. office staple and a rite of passage for countless colleagues. Walking through the archives, Gloria shared stories dating back to the 1890s in vivid detail. Gloria had the rare perspective that only comes with experience, longevity, and loyalty. In between quoting chapter and verse from races, she’d educate those around her on the importance of their roles and responsibility. Afterwards, Gloria would often sneak a small gift— pin, bag, or pen, always unicorn branded—on a new employee’s desk, welcoming them to the family.

“Gloria was everyone’s mother. She truly cared about every person she met and wanted them to thrive and succeed,” said Dr. Michael P. O’Leary, Chairman of the B.A.A. Board of Governors. “She bled blue and gold. In many ways, the B.A.A. and all of us connected to the marathon were her children. Not just family, but children: she would show love, but also wasn’t afraid to share what her opinion was or if she didn’t agree with a particular direction. Her understanding of the B.A.A., Boston’s history, and where we came from was invaluable and unmatched.”

Gloria was a jack-of-all-trades when it came to road races beyond the Boston Marathon and B.A.A. She became a USA Track & Field certified official and ultimately served on USATF-New England’s Board of Governors. In contrast to the mostly male officials that frequented the sport at the time, Gloria continued to break barriers while bringing a refreshing sense of camaraderie and belonging.

There was nothing more important to Gloria than her family, including the many nieces and nephews who she doted on. She hailed from a large family with deep Boston roots, which may have explained her knack for loving one and all as if they were her brother or sister.

Gloria Ratti was born March 13, 1931, and was raised in South Boston as one of ten siblings. She spent more than four decades serving the U.S. Government in the C.I.A., traveling around the world and rising to Chief Clerk. While she enjoyed going to the theatre, reading, and playing solitaire, Gloria first developed her affinity for road races after turning 40.

A pioneer, ambassador, mentor, and historian, Gloria was named by Runner’s World magazine  as “The Women’s Running Trailblazer You’ve Never Heard Of” in 2021. To the Boston Marathon and B.A.A., she was everything and more.

Gloria passed away peacefully on July 24, 2021 after a courageous battle with cancer, surrounded by her loving family. She was 90. 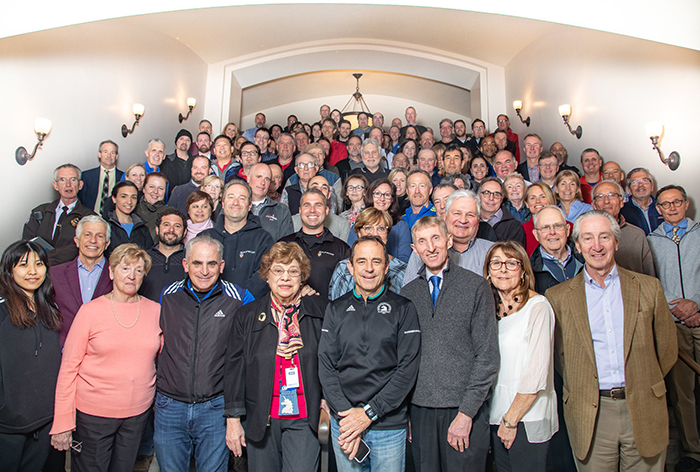